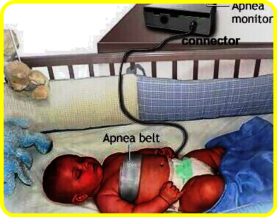 Apnea monitors detect the cessation of breathing (apnea) in infants and adults who are at risk of respiratory failure and alert the parent or attendant to the condition.

Some prolonged respiratory pauses result in low oxygen concentration levels in the body, which can lead to irreversible brain damage and, if prolonged, death.

The components of apnea monitors depend specifically on the type. However, in general, they compose of a set of sensors that obtain information on different physiological parameters.

This information pass to a micro-computer system, which analyses the sensors’ information and determines if apnea is occurring 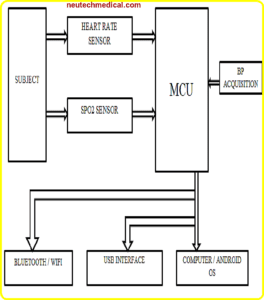 Monitors that use impedance pneumographic detect small changes in electrical impedance as air enters and leaves the lungs and as the blood volume changes in the thoracic cavity.

More direct methods of respiration detection monitor the airflow into and out of the lungs; these include thermistors, proximal airway pressure sensors, and carbon dioxide (CO2) sensors.

The apnea monitor attaché to the patient using the appropriate sensor for the measurement. Once connected, as the patient breathes, the unit monitors different body parameters. If an alarm sounds, the operator must attend to the patient immediately.

The only sure way to rid yourself of the condition for good is to either lose weight or have surgery to remove excess tissue from the palate or throat. Because CPAP and oral appliances work well, but they’re not cures for sleep apnea.

A pulse oximeter attached to your finger or earlobe measures your blood oxygen saturation. Single-lead electrocardiography or ECG use for this measuring your pulse rate.

There are nasal prongs and a sensor to provide nasal oxygen that measure the pressure changes during breathing in sleep.

What is an apnea monitor

An apnea monitor is a medical machine used to monitor heart rate and breathing at home. Apnea is breathing that slows or stops for whatever reason.

The monitor automatically sounds an alarm when your baby’s heart rate or breathing slows or stops.

This apnea monitor tracks the breathing and heart rate of babies even while they are sleeping. Monitors may sound like a good idea to concerned parents.

Are breathing monitors worth it

Critical organizations have reviewed research on apnea monitors and found no evidence that they affect the prevention of SIDS in healthy children.

An at-home sleep apnea test may be appropriate for you if you have symptoms of obstructive sleep apnea, such as: A sleep partner reports that you snore, snore, or gasp while sleeping.

What would be a reason to monitor for apnea in the home.

This is because it is considered normal for everyone to have 4-5 apnea in an hour. It is also normal if your AHI varies from night to night.

In addition to tracking disease activity, some monitors also track statistics such as your child’s breathing, heart rate, oxygen saturation level, and temperature. Some even provide sleep analytics that help you gain insight into your baby’s sleeping patterns.

At the present time, even the most advanced of smartwatches and fitness trackers can only detect the possibility of sleep apnea, and recommend that you seek further diagnosis. Only a sleep study analyzed by a board-certified doctor can diagnose obstructive sleep apnea.

Risks of an Apnea Monitor

Stick-on electrodes can occasionally irritate your child’s skin. This is usually not a big problem. If you have an electrical power supply problem or you have a power problem, this monitor may not work unless it has a backup battery.

Ask your home care company if your monitor has a battery backup system. If so, learn how to charge the battery.

This Apnea Monitor is a machine This monitor is small and portable. Which is used to monitor the baby’s heart rate and breathing after coming home.